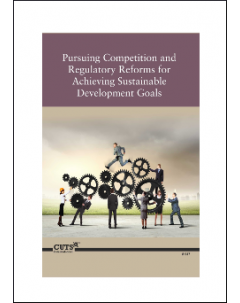 This volume has been prepared under the auspices of the project entitled, ‘Competition Reforms in Key Markets for Enhancing Social & Economic Welfare in Developing Countries’ (CREW Project). This project was implemented by CUTS in four countries: Ghana, India, Philippines and Zambia, and across two common sectors: Staple Food and Bus Transport with the support from DFID (UK) and BMZ (Germany) facilitated by GIZ (Germany). The aim of the project was to highlight the relevance of competition reforms for social and economic welfare in developing countries, and motivate other countries, governments and development partners to accord greater attention to the subject of competition reforms. In view of this overall aim of the project, with inputs from the project advisers CUTS designed the final conference of the CREW project on a broader theme to talk about ‘Relevance of Competition & Regulatory Reforms in Pursuing Sustainable Development Goals (SDGs) in Developing Countries’. The theme was thought to be both contemporary and relevant in view of the adoption of the SDGs a couple of months before this final conference. In addition to the support it received from DFID (UK), BMZ (Germany) and GIZ (Germany), the conference also received support from the World Bank, G-77 Secretariat and the OECD. CUTS is grateful to all the above organisations for supporting the conference, and indeed also the production of this volume. We acknowledge the support from the members of the Project Advisory Committee of the CREW project, who contributed to make this conference a grand success. Special thanks to Clement Onyango and colleagues at CUTS Nairobi for their support and tireless efforts in the run-up and during the conference. We gratefully acknowledge the hard work and patience of all the paper authors for contributing extremely interesting individual chapters to this volume. We are also thankful to those friends of CUTS who reviewed the draft papers – Eleanor Fox, Tania Begazo/Martha Licetti (World Bank), Rafaelita Aldaba, R S Khemani, Frederic Jenny, Payal Malik, Allan Fels, David Ong’olo, Ashwini Swain, Peter Holmes and John Davies/Lynn Robertson (OECD). We are indebted to Mukhisa Kituyi, Secretary General, UNCTAD for writing an encouraging Foreword – and we hope to continue to receive his and UNCTAD’s support. We greatly appreciate the diligence of Madhuri Vasnani and Garima Shrivastava for editing and Mukesh Tyagi for preparing the layout of this report. Special thanks are due to Ashutosh Soni for his excellent coordination of communication with authors and reviewers of papers of this volume. We acknowledge the efforts of all the members of the CREW team, especially Cornelius Dube, Shreya Kaushik and Neha Tomar. Last but not the least, this report would not have seen the light of the day without the skillful direction, and overall guidance of Pradeep S Mehta, Secretary General, CUTS. He took special interest in this volume and went through each and every paper carefully himself. Words alone cannot convey our sincere gratitude to each and every individual who have contributed in every small way towards bringing out this volume. But it is only words that this world thrives on. We express our sincere gratefulness to all such individuals, without whom the publication of this volume would not have been possible.